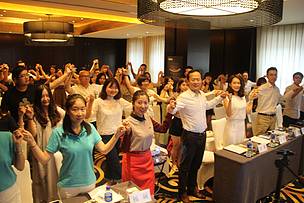 TRAFFIC
© TRAFFIC
WWF and TRAFFIC representatives spoke about some of the key findings and policy recommendations from a “Feasibility Study on China’s Ban of Commercial Ivory Trade” to be published later this month. The study aims to provide technical support for the Chinese government as they move to introduce a commercial ivory trade ban. Representatives from The Nature Conservancy (TNC), International Fund for Animal Welfare (IFAW) and Tencent’s Security Administration Department also spoke about their work on African Elephant conservation. A total of 52 media representatives attended.

At the start of the 20th century, there were around 3-5 million elephants living across Africa. Today, the number has plummeted to fewer than 500,000 and the African Elephant faces a bleak future if current poaching levels are sustained. In recent years, surging ivory demand has fueled an elephant poaching crisis that has raised concern at the highest levels in the international community, including the United Nations.

In September 2015, the leaders of China and the US both committed to prohibit ivory import and export and to phase out domestic ivory trade. Both countries have substantial ivory markets and their commitments set an example for the international community to follow on the issue of elephant conservation.

In early July this year, the US government issued new regulations to prevent the international commercial import and export of ivory and inter-State trade. In June, the Chinese government committed to release the timetable for the domestic ivory trade ban before the end of this year.

WWF/TRAFFIC conducted a feasibility study to support the process. The study pointed out China’s key role on the global ivory issue. “Illegalization” of all ivory on the market will help to raise people's awareness of elephant conservation and help law enforcement. WWF/TRAFFIC expect the Chinese government to implement the ban within one or two years. The ban should be permanent to discourage speculation and ivory hoarding. Both organizations also consider China should strengthen its co-operation with ivory source, transit, and consumer nations while a mechanism should be found to preserve the cultural heritage of ivory carving.

Dr Lin Li, WWF-China, Executive Director of Programmes commented that "ivory carving is China's intangible cultural heritage. China will ban the commercial ivory trade, and inherit ivory carving skills via non-commercial ways. This is a critical and historical choice made by the Chinese government recognizing the elephant poaching crisis. China is taking its responsibility in global governance.”

Zhou Fei, Head of TRAFFIC China Programme said that “today if we do one thing that could turn over the elephant poaching crisis in Africa, it would be an ivory trade ban in China and the US.”

Jin Xuan, Director of Security Administration Department presented the joint campaign “Penguins love earth” initiated by Tencent and other conservation NGOs including TRAFFIC last May. “Before this World Elephant Day, we added a tag on QQ(the most popular chatting app both in PC and mobile end in China) that users can easily report illegal wildlife products. This is an innovation worldwide and set an example for internet service how they can contribute to ecological environmental protection.”

Representative from TNC China introduced that their conservation education programme aiming to raise awareness of targeted consumers and reduce consumer’s demand for ivory products. Representative from IFAW expressed their hope that different communities and business sectors could take joint action to support government’s enactment of the ivory ban as early as possible.

On 12th July WWF and TRAFFIC launched an initiative aimed at reducing the demand for ivory products by raising awareness of elephant conservation and supporting the domestic ivory trade ban . WWF/TRAFFIC believe China's trade ban could effectively suppress the demand for ivory, and help to reverse the rising trend of African elephant poaching.

participants linked their index fingers together, committing to the rejection of ivory products and supporting the domestic ivory trade ban © TRAFFIC


About WWF
WWF is one of the world’s largest and most respected independent conservation organizations, with over 5 million supporters and a global network active in over 100 countries. WWF's mission is to stop the degradation of the Earth's natural environment and to build a future in which humans live in harmony with nature, by conserving the world's biological diversity, ensuring that the use of renewable natural resources is sustainable, and promoting the reduction of pollution and wasteful consumption.
www.panda.org/news for latest news and media resources