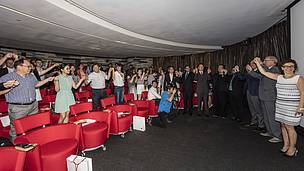 WWFchina
© 所有参与活动的人，通过勾手的方式连接起来，表达保护大象，拒绝象牙贸易
Officially launched at an 'Exhibition on Emblematic Species' in Beijing organized by the Prince Albert II Foundation of Monaco and the Monaco Embassy to China, the campaign will use social and traditional media to dissuade people from buying any more ivory and to raise awareness about the plight of Africa's elephants and international efforts to protect them.

The campaign will also build public support for the government's decision to phase out the domestic ivory trade, which was confirmed by President Xi Jinping in September 2015 during his visit to Washington. The US has already imposed an almost total ban on its domestic ivory market after new regulations came into force on July 6th.

"China and the US have demonstrated remarkable leadership by deciding to close their domestic ivory markets, a critical factor for the future of elephants,” said Marco Lambertini, Director General of WWF International. “WWF and TRAFFIC's campaign comes at a key moment to build support for the swift implementation of the ban in China as time is a critical to saving Africa's elephants.”

The campaign will call on people to make a public commitment to stop buying ivory and encourage them to spread the word so that millions of people pledge never to buy ivory again. In particular, people will be urged to link their index fingers to show their commitment to protecting elephants and passing the message on, as Vice President of the Prince Albert II Foundation of Monaco and representatives of Embassy of Monaco to China, WWF and TRAFFIC did at the official launch.


"This campaign will build on the innovative work that TRAFFIC and WWF have already been doing in China to change consumer behaviour and reduce demand for ivory,” said Dr Lin Li, WWF-China, Executive Director of Programmes. “The Tibetan antelope was saved from a similar poaching crisis with support from local government, the public and the international community. We are expecting the same joint effort will contribute to saving the elephant. WWF and Traffic are expecting and calling for ban on commercial trade on ivory to be issued and implemented within two years.”

“TRAFFIC has partnered with the government and private sector, including Alibaba, Tencent, the courier and tourism companies to tackle the illegal ivory trade, as well as worked to promote sustainable alternatives to ivory,” said Zhou Fei, Head of TRAFFIC China Programme. “Now it’s time to build mass public support to say no to ivory trade.”

The campaign comes less than three months before the Convention on International Trade in Endangered Species of Wild Fauna and Flora (CITES) CoP17 in Johannesburg when Parties, including China, will discuss a range of issues relating to elephants. The Chinese government is expected to publish its timetable before the end of this year to close its domestic ivory trade.

About WWF
WWF is one of the world’s largest and most respected independent conservation organizations, with over 5 million supporters and a global network active in over 100 countries. WWF's mission is to stop the degradation of the Earth's natural environment and to build a future in which humans live in harmony with nature, by conserving the world's biological diversity, ensuring that the use of renewable natural resources is sustainable, and promoting the reduction of pollution and wasteful consumption.
www.panda.org/news for latest news and media resources 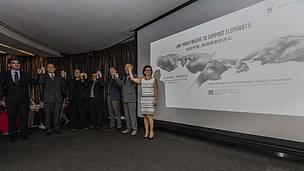 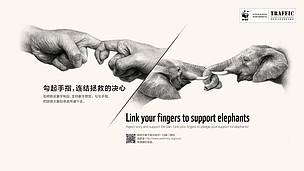