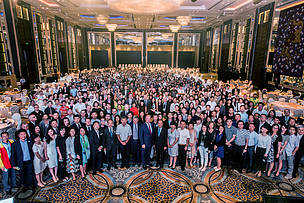 Group Photo after finish the successful Campaign
© WWF China
Shenzhen, China (6/16/16) —The Climate Reality Project concluded its 32nd Climate Reality Leadership Corps training in Shenzhen China having added more than 500 new Climate Reality Leaders to its ranks. These Leaders will return to schools, businesses and communities across China equipped with the education and tools necessary to advocate locally for renewable energy initiatives, continue to support China’s leadership on climate action, and drive action for solutions worldwide.

Over the course of two days, these Climate Reality Leaders were taught by Al Gore, former Vice President of the United States and Chairman of The Climate Reality Project, along with world-class scientists, strategists, business leaders, communicators and technical specialists including:
•    Wei Jianguo, Vice Chairman of the China Center for International Economic Exchanges (CCIEE), who discussed China’s global leadership on climate change.
•    Xu Qin, Mayor of Shenzhen, who discussed how Shenzhen is a leading green city, with efforts to deploy and promote renewable energy, electric vehicles, bike and walking trails, and greenspace.
•    Dr. Li Lin, Executive Director of Programs, WWF China, played a role as a host in the first day, giving a general introduction about WWF China and the achievements in climate change area, in part thanks to a new strategic partnership with Climate Reality.
•    Wang Shi, Chairman of Vanke Co. and Founder of “C-Team” who explained how his passion for mountain climbing informed his climate awareness when he encountered no snow on the summit of Mt. Kilimanjaro.
•    Hsu Eyee, host of CCTV News Crossover, who spoke about her desire to have her daughter live in a world where the sky is blue, rather than gray.
•    Dr. Shi Zhenrong, Founder, Suntech Power, who talked about the incredible advances being made every day in solar technology, making it a more cost-competitive form of clean electricity.
•    Li Junfeng, Director General, National Center for Climate Change Strategy and International Cooperation (NCSC), who discussed the importance of entrepreneurship in combatting the climate crisis.
•    Dr. Liu Xiao Hai, Executive Director of Programs, WWF China also conducted a special session on biodiversity and climate change.
•    Mr. Luke, representing WWF China Solvers, joined a panel on innovation clean energy solutions.

China and its nearly 1.4 billion people are particularly vulnerable to the ever-increasing threats of climate change. Massive flooding, extreme rains and a significant increase in mean annual temperature all pose threats to China, one of the most ecologically diverse nations on the planet. China also faces a national crisis regarding air pollution due to its high levels of carbon emissions.

While the climate crisis presents a challenge in China, the training focused on solutions and the country’s unique position as a driver of global climate action. China not only made the Paris Agreement possible, but the country has also taken concrete action by investing and innovating in clean energy manufacturing and deployment. As a major hub of commerce and manufacturing, China’s efforts have driven down the costs of clean energy around the world, making each country’s emissions reduction commitments more attainable, affordable, and ambitious.

The Climate Reality Leaders trained in Shenzhen will join a global network of thousands of others more than 130 countries, with recent trainings held in Manila, Miami, Toronto, New Delhi, Johannesburg, Rio de Janeiro and Melbourne. Climate Reality Project and World Wide Fund for Nature also signed a partnership agreement to collaborate on a multi-year climate communications program strategy which officially launched during the training and will be followed by periodic workshops, events and other activities in China.

For more information, you can either visit https://www.climaterealityproject.org/leadership-corps.