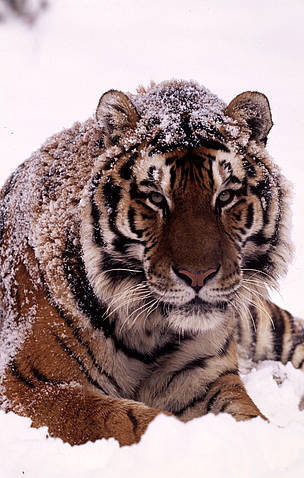 Tigers once roamed over most of China’s territory.
© Kevin SCHAFER / WWF
(Beijing, China) -- A national plan to recover the endangered Amur, Bengal and Indo-China tiger and reintroduce the South China tiger, which has not been seen in the wild for more than 20 years, was launched today on Global Tiger Day, by China’s State Forestry Administration (SFA).

China’s Tiger Recovery Program (CTRP), which will last till 2022, aims to increase the areas of and improve the quality of tiger habitats; establish monitoring and patrolling systems; balance tiger conservation with the local economy; crack-down on poaching, smuggling and the illegal trade of tiger products; and enhance international exchange and cooperation on tiger conservation. The Program focuses on the nine major tiger provinces in China: Jilin, Heilongjiang, Yunnan, Fujian, Jiangxi, Hubei, Guangdong, Hunan and the Tibet Autonomous Region.

WWF highly welcomes the launch of this official plan. Less than a year from the St. Petersburg Tiger Summit in November 2010 in which Chinese Premier Wen Jiabao and other world leaders called on the international community to help save the wild tigers, the CTRP is a significant step forward in ensuring the recovery of this endangered species. It also demonstrates China’s commitment to the Global Tiger Recovery Program (GTRP), a comprehensive plan made by 13 tiger range countries that would see the recovery of the endangered species.

"China ranks top of the world in terms of tiger subspecies,” says Dr. Zhu Chunquan, Conservation Director of Biodiversity and Operations, WWF-China. “This plan marks China's first step towards tiger protection in the wake of the Global Tiger Recovery Program, being not only a milestone for China, but also a significant act to the world."

Following on from the launch of the CTRP, experts and representatives from the nine major tiger provinces and academia also gathered to discuss priority plans for actions on the existing tiger sub-species in China.

Doubling the number of Amur tigers by 2022

In 2010, WWF launched a bold but achievable goal called Tx2 – to double the number of tigers in the wild by 2022, the next Chinese Year of the Tiger. Worldwide, there are as few as 3,200 tigers remaining, and only 40-50 wild tigers left in China. In both Jilin and Heilongjiang Province, northeast China WWF have been focusing on increasing the number of Amur tigers, which has the biggest potential of recovery amongst the four sub-species of tigers in China.

“These projects are crucial to the expansion and recovery of tigers in the Sino-Russian border areas," says Fan Zhiyong, Director of Species Programme, WWF-China. “We hope these efforts, together with the National Plan will push forward the process of China's tiger protection and recovery."

Background Information
The Tiger Summit was held in St. Petersburg, Russia in November 2010, with 13 heads of governments from tiger-range countries including Chinese Premier Wen Jiabao and Russian Prime Minister Vladimir Putin. The summit discussed the protection of endangered tigers through a united initialisation of the Global Tiger Recovery Program along with the St. Petersburg Declaration. The Program called for concerted and effective measures in halting the decline of the species, and is aimed at doubling the number of tigers worldwide by 2022.

Tigers once roamed over most of China’s territory.
© Kevin SCHAFER / WWF Enlarge
Like this article?