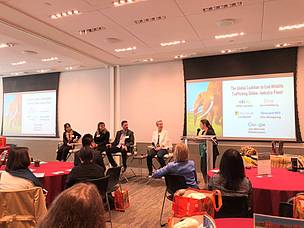 21 tech companies from North America, Asia, Europe, and Africa came together as the first-ever Global Coalition to End Wildlife Trafficking Online. As members of this coalition, tech companies pledge to work together to collectively reduce wildlife trafficking across platforms by 80% by 2020. In collaboration with WWF, TRAFFIC, and International Fund for Animal Welfare (IFAW), each company will develop and implement policies to help end wildlife trafficking online.

Criminals are making a killing from selling rare species and products made from their parts. Inconsistent policies across the web invariably create a “whack-a-mole” effect, where ads may be removed from one site just to pop up somewhere else. These companies see the problem and are uniting to ensure an internet where traffickers have nowhere left to turn.

“Google is proud to partner with WWF as a founding member of this Coalition, and to join other companies in working to protect endangered species from illegal wildlife trade online,” said David Graff, Senior Director, Trust & Safety Global Product Policy, Google.

It takes just minutes to find dubious wildlife for sale online, including everything from trinkets like elephant ivory carvings to live animals like tiger or cheetah cubs. These sales are generally illegal and in breach of a site’s rules. However, the Internet’s global connectivity and relative anonymity of sellers, combined with rapid transport, enable wildlife traffickers to buy, sell, and ship animals and wildlife products with just a few clicks. As more traders and consumers move online globally and traditional physical markets for wildlife trade become more obsolete, it is a critical time to ensure that social media and e-commerce platforms cannot be exploited by the loopholes to detection created by wildlife traffickers.

“Tencent has always adopted a zero tolerance towards illegal wildlife trade on its platform and a direct portal enables users to report suspected wildlife trafficking on Tencent’s WeChat platform under our ‘Tencent for the Planet,” Shu Mengying, Manager of Tencent Security Management Department introduced, “In addition, the launch of ‘Illegal wildlife and products’ reporting on Tencent’s QQ is a great innovation among instant messaging products, while Tencent also encourage users to participate in and support online wildlife conservation activities through various forms of education.”

The annual value of wildlife crime is as much as $20 billion, according to the Convention on International Trade in Endangered Species (CITES). More than 20,000 African elephants are illegally killed each year for their tusks, and nearly three rhinos are poached each day in South Africa alone for their horns. Countless species are under threat from trafficking, accelerated by online access to consumers, most of whom are unaware that the product they are buying could be devastating species populations and funding crime gangs. Addressing this issue in partnership with these companies is a critical step toward ensuring a world without rhinos, elephants and thousands of other creatures does not become a reality.

[1] Chinese Internet Companies announced the formation of a coalition to combat wildlife cybercrime on Nov 22, 2017 in Beijing, China. The move was initiated by three China-based internet giants—Baidu, Alibaba and Tencent, and joined by an additional 8 Chinese internet companies. The establishment of the coalition was supported by Chinese government authorities including the State Forestry Administration(SFA), CITES Management Authority and China Cyberspace Administration. TRAFFIC serves as secretariat of this coalition.]