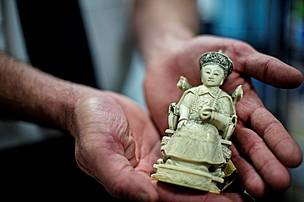 “WWF applauds China’s decision to ban its domestic ivory trade so swiftly, underlining the government’s determination to reduce demand for ivory and help save Africa’s elephants,” said Lo Sze Ping, CEO of WWF China. “Closing the world’s largest legal ivory market will deter people in China and beyond from buying ivory and make it harder for ivory traffickers to sell their illegal stocks.”

At the Convention on International Trade in Endangered Species of Wild Fauna and Flora (CITES) held in South Africa in October, the delegates adopted a resolution calling for all countries with a legal domestic market for ivory that is contributing to poaching or illegal trade to take measures to close their domestic ivory markets.

“Now that three of the world’s largest domestic ivory markets – China, Hong Kong SAR and the US – are being phased out, we hope that other countries will follow suit,” said Lo Sze Ping. “China and the US have shown how quickly markets can be addressed and the sooner the better for Africa’s elephants.”

In August, WWF and TRAFFIC released key recommendations that found a ban could be implemented within two years and that it would raise people's awareness of elephant conservation and help law enforcement tackle the illegal trade.

WWF and TRAFFIC believe the ban should be permanent to discourage speculation and ivory hoarding, while a pragmatic solution should be found to preserve the cultural heritage of ivory carving.

While elephant poaching in Africa appears to have peaked in 2011, around 20,000 continue to be killed illegally each year across the continent, primarily to feed demand for ivory in Asia, particularly in China.

While closing all commercial domestic ivory markets will have a major impact, bans alone will not stop the illegal ivory trade if demand persists. WWF and TRAFFIC encourage the Chinese government to continue their efforts to reduce demand for ivory, raise public awareness and work with other governments, conservation organisations, the private sector and local communities to end the illegal ivory trade – and give Africa’s elephants a future free from poaching.

September’s CITES meeting also provided an opportunity to enhance international efforts to end the poaching and ivory trafficking by strengthening the National Ivory Action Plan (NIAP) process, which was launched at the previous Conference of the Parties (CoP) in Bangkok in 2013 and is beginning to yield results. Along with 18 other Asian and African countries, China has had to develop and implement an ivory action plan as part of the global response to the current crisis.

The publication of the timetable stems from a joint commitment that the presidents of China and the United States made during their meeting in Washington in September 2015 to impose near-total ivory bans in their countries. New federal regulations were enacted in the US on 6 July that almost completely prohibit the domestic ivory trade.

Meanwhile, the authorities in Hong Kong announced that they would phase out the city’s commercial domestic ivory trade by 2021, although a WWF feasibility study found that it could be done within two years.


About WWF
WWF is one of the world's largest and most respected independent conservation organizations, with over 5 million supporters and a global network active in over 100 countries. WWF's mission is to stop the degradation of the Earth's natural environment and to build a future in which humans live in harmony with nature, by conserving the world's biological diversity, ensuring that the use of renewable natural resources is sustainable, and promoting the reduction of pollution and wasteful consumption.
panda.org/news for latest news and media resources

About TRAFFIC
TRAFFIC, the wildlife trade monitoring network, is the leading non-governmental organization working globally on trade in wild animals and plants in the context of both biodiversity conservation and sustainable development. TRAFFIC is a strategic alliance of WWF and IUCN.
www.traffic.org for more information. 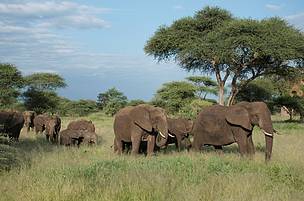