An act to save African elephants | WWF China

An act to save African elephants 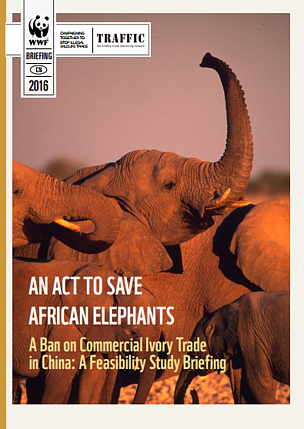 An act to save African elephants
© WWF China
This briefing is a rapid evaluation based on existing knowledge derived from TRAFFIC’s monitoring work of the Chinese ivory market. While this is not a comprehensive study, this briefing does outline issues to take into account when examining the need, feasibility and possible implementation challenges involved when considering a ban on commercial ivory trade in China, as well as some next steps needed towards that end. An effective ivory trade ban in the Chinese context will require careful consideration of the particular regulatory mechanisms and implementation structures and processes that will define and support the new domestic policy. WWF and TRAFFIC fully intend to augment this initial briefing document with further in depth studies.

WWF and TRAFFIC believe that an ivory trade ban in China is feasible and could be effective in contributing to a reduction in current threats to African elephants. Such an ambitious and achievable act could garner positive exposure for China’s responsible action on a critical wildlife conservation issue and become a positive influence on other countries efforts to tackle the illicit ivory trade. WWF and TRAFFIC would support an ivory trade ban by the Chinese government and stand ready to assist in its implementation and help evaluate future impacts of such a ban in China and around the world.

An act to save African elephants
© WWF China Enlarge