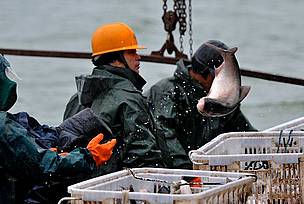 A carp jumps out of its bucket during a WWF ecofish harvesting project in Dongting Lake, central Yangtze.
© Yang Xiaowen
Beijing, China: In a significant step to minimize its ecological impacts on the central and lower Yangtze, the Three Gorges Dam (TGD) has revised its water regulations for the first time in order to meet the flow requirements of the Chinese carp and to serve their breeding requirements.

Over a week in June, the TGD added an additional 2000m3/s, about the amount of a common swimming pool, to its daily discharge to the downstream in an attempt to mimic rising waters, which is needed in order for Chinese carps to spawn.

The carps also require other particular hydrological conditions, such as sustained water temperatures above 18°C, a certain water level rising process and a certain flow velocity. But ever since the TGD was built the flow requirements needed for the Chinese carps has been impeded, affecting the reproduction possibilities of the carps.

“The Chinese carps usually spawn in the Yangtze from the end of April to the beginning of July,” says Mr. Zhao Yimin, Division Chief of the Yangtze Fishery Resources Commission (YFC). “But the TGD reservoir operates at a low water level from April to May every year, which has changed the hydrological and hydraulic conditions in the spawning sites, bringing negative impacts to the reproduction of the carps.”

About 60% of China’s freshwater fish production comes from the Yangtze, with four species of the Chinese carps (black, grass, bighead and silver carp – China's "Four Domesticated Fish") coming from the area. But overfishing, water pollution, disconnection between lakes and rivers, wetland reclamation, waterway modification and channelization, and unsustainable operation of water infrastructures have rapidly decreased the fishery resources in the Yangtze river basin over the past 30 years.

Since the1960s, the spawning scale of Chinese carps has decreased by 90%. According to research by the Yangtze River Fisheries Research Institute under the Chinese Academy of Fishery Sciences (CAFS), there has been an obvious decline of Chinese carps in the central Yangtze. In monitoring data collected in Jianli County of the central Yangtze, the annual average amount of baby fish fry has declined from 2.524 billion between 1997-2003 (before the water impoundment of the TGD), to 42 million in 2009. As a main delicacy in Chinese cuisine, as well as a robust carp population being as important indicator of the health of the eco-system, these statistics are a cry to help protect and replenish the Yangtze’s most economically important fishes.

To help prevent any further decline of fishery resources, WWF along with the YFC, the Changjiang Water Resources Commission (CWRC), China Three Gorges Project Corporation (CTGPC), and The Nature Conservancy (TNC), are working together to implement a number of ecological operational guidelines, such as reconnecting river and lakes; measures to aid carp breeding (such as releasing baby fish fry, adult fish and live-bearing fish to rivers; and making sure that water is sufficiently provided and properly deployed in the Yangtze through E-Flows studies); as well as improving the TGD’s water regulation by developing ecological guidelines.

“We are very pleased to see the TGD begin its test of ecological operations,” says Dr. Zhu Chunquan, Conservation Director of Biodiversity and Operations of WWF-China. “It’s an important measure to minimize the TGD’s ecological impacts to the central and lower Yangtze.”

To help increase the overall ecosystem of the central and lower Yangtze, WWF is also calling for further work such as research on the impacts on the wetlands and migratory water birds in Dongting and Poyang lakes and mitigation measures through TGD’s operation; and conducting studies on E-Flows requirements for wetlands and aquatic flagship species and integrating these requirements into the TGD ecological operation guidelines.

“The test by the TGD is just the beginning,” says Dr. Zhu Chunquan. “WWF hopes monitoring data can be collected as the basis for further optimization and improvement of TGD operation guidelines.”

A carp jumps out of its bucket during a WWF ecofish harvesting project in Dongting Lake, central Yangtze.
© Yang Xiaowen Enlarge
Like this article?